As part of Farmhouse Breakfast Week, confirmed carnivore Eleanor Gaskarth takes her love of meat to the logical next step – making her own sausages.

If you’re not in the mood to play animal lucky dip each time you consume a meat product, you seem to have two choices. Either buy from a trusted, reputable, preferably local producer who takes pride in the quality of their goods (and knowing exactly what’s in them)… or make them yourself.

END_OF_DOCUMENT_TOKEN_TO_BE_REPLACED

The very lovely people at Kernow Sausage Company in Cornwall have very kindly given Foodies South West some goodies to give away to mark Farmhouse Breakfast Week, which started yesterday.

If ever there was weather that makes you hanker after a good filling breakfast it is this snow and ice sweeping the country.
The Westcountry may have missed out on the worst of it this time but you should still finally listen to your mother’s (or father’s) advice and leave the house only after something more filling than depressing muesli or, urgh, a Kellogg’s Pop Tart.

END_OF_DOCUMENT_TOKEN_TO_BE_REPLACED

Of course I’m talking about locally sourced and well-cooked sausages, served with mash and cabbage, what else?

This is part two of my St Nicholas’ Market mini-adventure. I would normally wrap both parts in one but I thought that both were worthy of some attention, like two twins that both want mummy’s love.

As my lovely girlfriend and I ate our Moroccan lamb at Al Bab Mansour’s place, my eyes shifted away to what was around us. immediately to my left was the Bristol Sausage Shop.

Now this was something of a coincidence. Just that morning, my girlfriend had remarked about how she’d forgotten to buy one of the ingredients for our dinner that night when she went shopping on Friday.

“What did you forget,” I asked.

“What are we having for dinner,” I tentatively asked.

“Bangers and mash,” was her retort.

“So you went shopping for bangers and mash but forgot the bangers?”

So you can imagine that I was delighted when we went out later and happened upon a sausage vendor right in front of us. You might say the sausage god was smiling on us, if you were weird.

Made by a butcher in Cirencester, there were loads of varieties on offer, the hard part was whittling it down to a firm choice of two flavours. There were many types of pork sausage, ranging from the herb-heavy Cotswold to the herby Toulouse or the straightforward classic Gloucester Old Spot, all made with the best local ingredients.

Because we’d just eaten a hefty meal and because each of the sausages was the size of a cucumber, we only bought five. But my god, they were great.

We bought two of the Cotswolds and three of the shop’s signature St Nicholas 1743 bangers. They were then kept in a handbag for three hours while we went and watched Exit Through the Gift Shop, giving them time to, ahem, mature.

For the rest of the enjoyment I must hand all the credit to my girlfriend, who, while I reclined watching England play pretty badly at Rugby against France, prepared the food. I should point out that she was quite happy with this arrangement, as long as I kept her wine topped up. Which I did.

In return she cooked the sausages to perfection. It may be a cliché that the way to a man’s heart is through his stomach, but it is pretty much true for me. Dinner was excellent, the massive sausages were ace, the herby ones herby and the St Nicks ones oozing with their cider and mustard flavour. I was truly a happy man. A couple down the local and I went to bed content, falling asleep as soon as my head hit the pillow. Well, almost…

A gentleman amateur food and drink lover celebrating the best the South West of England has to offer. 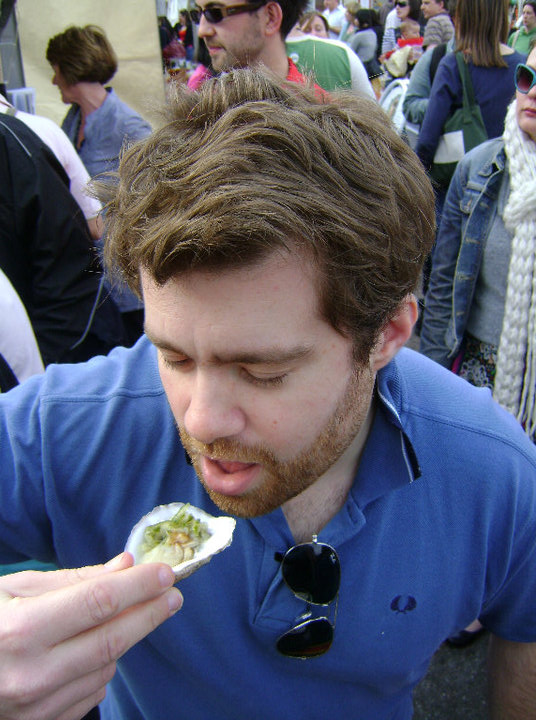 What do you fancy?

Remember when I wrote that…